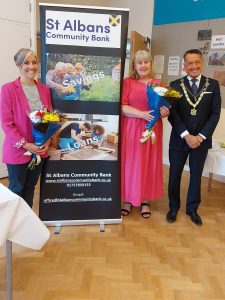 In welcoming guests and a number of past and present volunteers, the current Chair, Isabel Dolan, praised the founder members for all their work in setting up the Credit Union in 2002 and went on to describe the growth of the organisation over 20 years.

The St Albans and District Credit Union, trading as St Albans Community Bank since 2021, currently has 1,600 members and members’ savings have grown to over £1.2 million.

Since formation, the organisation has granted over 2,000 loans, often to those who have difficulty in accessing mainstream financial services, and in total has lent over £2.7 million.

Isabel also referred to the Community Bank’s work over the years in association with other local bodies and organisations, noting particularly the loan schemes that the Community Bank has run for both the St Albans City & District Council and Hertfordshire County Council.

In response both the Mayor and Daisy Cooper congratulated the Community Bank on providing its important services to the St Albans community over the past two decades.

The Mayor said: “As budgets are being stretched, organisations such as the St Albans Community Bank become worth their weight in gold. Anything we can do to heighten their profile must be a good thing”

Daisy Cooper MP said: “It was an absolute pleasure to meet the volunteers and founder members of this organisation, which has played an important part in our community for more than 20 years now.  With the cost-of-living emergency really starting to bite, it’s not just the less fortunate in our community who may struggle – anyone who needs a short-term loan should know that the St Albans Community Bank stands ready to help, if they can. I’m grateful to all the staff and volunteers here for doing such important work for those who need it, both now and in the future.”

Cookies are small text files stored on your computer by your web browser at the request of a site you're viewing. This allows the site you're viewing to remember things about you, such as your preferences and history or to keep you logged in. Cookies may be stored on your computer for a short time (such as only while your browser is open) or for an extended period of time, even years. Cookies not set by this site will not be accessible to us.

We do not collect or store your personal information (for example your name or address) so this information can’t be used to identify who you are. This site uses cookies for numerous things, including:

These are the main cookies we set during normal use of our web site.

Additional cookies may be set during the use of the site to remember information as certain actions are being performed, or remembering certain preferences.

Other cookies may be set by third party service providers which may provide information such as tracking anonymously which users are visiting the site, or set by content embedded into some pages, such as YouTube or other media service providers.

Third party services we use that set cookies are:

These are the Additional cookies we set during normal use of our web site.

Managing your cookies and cookie preferences must be done from within your browser's options/preferences. Here is a list of guides on how to do this for popular browser software: